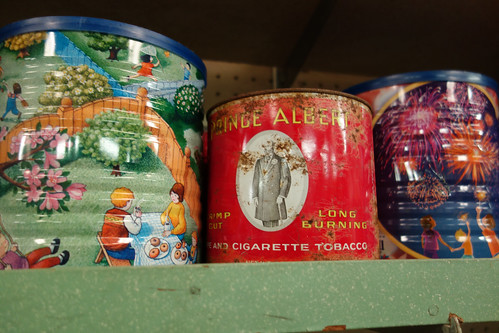 Man, I thought I wasted a lot of time on stupid things — but I can’t imagine taking the time to compile a list of "Prince Albert in a can" jokes for Wikipedia:

The joke was used in the 1990 horror miniseries Stephen King’s It in a scene where Pennywise the Dancing Clown (Tim Curry) taunts Richie Tozier (Harry Anderson]). Invisible to everyone but Richie, Pennywise says to him, "Excuse me, sir. Do you have Prince Albert in a can? You do? Well, you better let the poor guy out!"
In "Weird Al" Yankovic’s song "Phony Calls" (a parody of TLC’s "Waterfalls") from the Bad Hair Day album, the lyrics include the reference "Little Melvin has a natural obsession/Askin’ for Prince Albert in a can/He gets a kick each time he makes a collect call/To some guy he doesn’t know who lives in Japan".
In Death Masks by Jim Butcher, Harry Dresden makes an offering of Prince Albert tobacco to a loa he’d summoned. Later, Molly Carpenter tricks their Russian friend Sanya into prank-calling a number of stores, under the guise of helping Harry with his shopping list. Sanya doesn’t understand why asking if they have "Prince Albert in a can" causes people to hang up.
In the Family Guy (season 2) episode "Fifteen Minutes of Shame", Stewie makes the stereotypical prank call to a talk show called The Diane Show.
Brendan Fraser’s character buys Prince Albert pipe tobacco while stockpiling supplies in the film Blast From the Past.
In Retail (comic strip) on 3-11-11 Cooper takes a call for Prince Albert in a can. Assuming it is a joke he hangs up, only to notice that the store does in fact sell "Prince Albert" in a can.
In the Wings (NBC TV series) episode Airport ’90, Lowell calls Faye from within the terminal in an attempt to prank her using the Prince Albert in a can joke.
In Futurama episode ’31st Century Fox’, Bender is asked if he is of noble bearing, and responds "Well, I am descended from Prince Albert in a can."
In Season 2, Episode 1 of The Venture Bros., "Love-Bheits", one of the members of the Ünderland resistance movement is shown making the joke as part of a training exercise.
In an episode of Whose Line Is It Anyway?, Brad Sherwood parodies Alexander Graham Bell’s first phone call with the joke.[8]
In Series 6 Episode 17 of Cheers "To All the Girls I’ve Loved Before" Woody asks Frasier to use the joke if Rebecca answers the phone.
In Season 1, Episode 6 of the Powerpuff Girls, after Big Billy of the Gangreen Gang botches a prank call, Ace grabs the phone and says "Prince Albert… the Fridge!"
In an episode of Dexter’s Laboratory, one of Dexter’s experiments starts carrying away the fridge. Mom calls out to Dad, "Honey? The refrigerator’s running!" Dad, in the bathroom, replies, "And Prince Albert’s in the can!" (at which a stereotypical prince pops out of the toilet).
In an episode of "Sabrina, the Teenage Witch", Aunt Zelda prank calls a shop and asks for ‘Prince Albert in a can." When she hangs up, the shopkeeper opens a can and finds a tiny Prince Albert inside.
In an early comic of Brewster Rockit: Space Guy! on of the first contact with aliens consist of the aliens asking if the station has Price Albert in a can. Brewster, however, mentions that they do.
In the episode "Bloo’s Brothers" of Foster’s Home for Imaginary Friends, one of Bloo’s knock-off clones prank calls Mr. Herriman asking "Do you have Prince Albert n a can?" Mr. Herriman responds, "I don’t understand the question." The imitation Bloo still replies with the expected "You’d better let him out!"
The Van Dyke Parks song Clang of the Yankee Reaper references the tobacco with the line "The sun never set on the Empire / Prince Albert came in a can."

Tagged: , Farmville, Virginia , prince albert in a can , thrift shop

Kindly get back to your previous orientation view... your wheel is rolling there...

Congratulations! Your winning link has been sent to you via email.
Continue and Apply To Cart
Skip for Now
VAPE LIPS® special offer unlocked!
You have a chance to win! Are you feeling lucky? Give it a spin :)
* You can spin the wheel by entering your email
* If you win, you can claim your special offer via email within a limited time
* VAPE LIPS® reserves the right to cancel this special offer anytime
Privacy

Want to Win the Car of Your Dreams?

Check your email to get your winning coupon!X