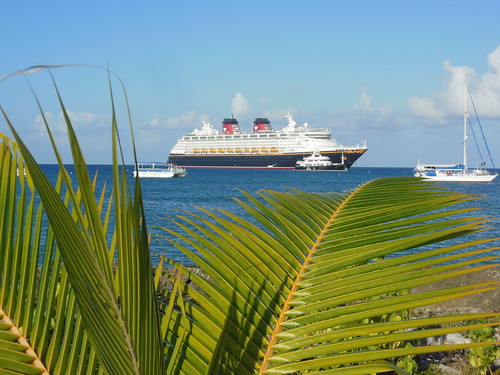 Okay, so a bunch of friends asked about us doing a Disney Cruise without kids. Here’s my official report.

First, the ship is not tacky. It is done in the classic style of the cruise lines of yesteryear. In the main lobby, there is a bronze statue of the Little Mermaid and hidden in the iron work in the railing are some Disney characters, but it is all surprisingly limited and tasteful.

The second area is for older kids. That’s the area with the massive video screen where they play movies, rock videos and Disney Channel type shows. There is a pool there, some spas and a water slide. The pool is sometimes covered and used as a dance floor or for more seating.

The third area is for those 18 and older. It’s a quiet place with softer music playing and a bar. It too has a pool and some spas. Kids are not allowed there although there is no barrier to keep them out.

Yes there were plenty of kids of all ages onboard but at no time did they interfere with anything we were doing or annoy us in anyway.

Disney Cruises are pretty upscale. They attract nicer crowds. We’ve done a Carnival Cruise and thought it was a freak show. With Disney, nobody dresses poorly and I didn’t see anyone, adult or child, behave inappropriately. I saw a couple exhausted kids meltdown but they were quickly taken to their cabins for naps.

Our stateroom was adorable. Again, the Disney presence is there, but restrained.

It probably helps if you are a bit of a Disney nut. The more characters and movies you are familiar with, the more you’ll like the experience, but it isn’t at all necessary.

There are so many activities for all age groups that you can’t do them all. You have to make choices. There are restaurants, clubs and shows for all tastes. Broadway style shows are presented twice each night. The costumes and props are amazing. Then there were comedians well worth seeing.

There were performers in the bars and clubs that were pretty good too.

Everything is included with just a few exceptions. Alcohol beverages are extra and there is one restaurant (the top place onboard) where they charge a flat fee of $25 per person to dine there.

Naturally there are plenty of ways to spend more money if you so desire. There are a couple stores onboard and, for example, there was a daily bingo event that cost $40 to join. They often have special cups available for your drinks, some that light up, some commemorating events, etc. Those cost additional cash.

Basic gratuities are automatically added to your bill. This included housekeepers and your wait staff which is assigned to you throughout the cruise. If you want to tip beyond that, you certainly can.

The ship we were on was the Disney Wonder which was built in 1999. It looks absolutely brand new and later in the evening or while in port, you might see some of the ongoing refurbishing, painting and repairing going on. It is, after all, like a floating city.

There were 2800 passengers onboard, and 1000 crew members. The crew represented 59 nations and every single one we ran into was polite, courteous, helpful, and knowledgeable and seemed to be enjoying his or her job. They are constantly asking if you are having a good time and enjoying yourself.

They are fanatical about cleanliness. They are constantly handing out disinfectant wipes as you enter the restaurants and they are constantly cleaning areas that people touch often. It’s an amazing thing to see and it’s obvious they do not want any disease outbreaks like some other cruise lines have experienced. At one point, someone polluted the kid’s pool. They drained it immediately, scrubbed it and refilled it.

If you take a tour while the ship is in port, Disney crew members make sure you get where you are supposed to be on time. They are incredibly organized.

Housekeeping cleans your stateroom twice a day. They tend to shape towels into animals or characters and leave them on the bed. They also leave the daily newsletter which is really a guide to activities for the next 24 hours.

Disney Cruise Line is the only one licensed to shoot off fireworks at sea. That’s sort of the grand finally to the big party on the last night. That was the only time during the whole trip that there was truly a crowd anywhere.

The theme of the big party was pirates. It started with dinner and a lot of people wear pirate costumes all night long which is really funny. Everyone is going around talking pirate talk. Even the restaurant staffers are dressed in pirate uniforms.

When we arrived to eat, there was a Pirates of the Caribbean bandana at each place setting. Most people wore them on their heads. They play pirate music and then the entire restaurant staff puts on a show.

At various times there are photo taking opportunities where you can take pictures with your favorite characters and of course, the Disney Princesses. The lines can be a bit long for that but of course, it didn’t matter to us.

The ship’s horn is very unique. They blow it when entering a port or if another ship passes. Instead of just a single loud blast, it consists of the first seven notes of the song “When You Wish Upon a Star”. They announce over the intercom that they are about to sound the horns ahead of actually doing it so you can cover your ears if you so desire.

Anyway, the ship is gorgeous. In the Caymans, I sat on a bench while Margaret did a little shopping and a British couple sat with me. We got talking and the husband asked which ship I was on. When I said Disney, he commented on how beautiful the ship is as he had seen it anchored offshore.

There were a lot of couples onboard without kids. We spent a lot of time with a couple from Iowa and a mother and grown daughter from New Jersey. There were grandparents who treated their kids and grandkids to the cruise, and so on. If chasing after the opposite sex is you goal however, a Disney Cruise would probably be a bit of a disappointment.

Like the crew, the passengers are from all over the globe (a fact we happen to enjoy) and everyone is friendly.

And for the record, there were times that we hung around the kids areas. First, that’s where the ice cream machine is, but it’s a lively, fun place.

On a final note, one of the comedians joked that he often performs on cruise ships and how nice it was to have a younger audience. He said he was used to an audience of old people falling asleep in the middle of the show with their mouths open.

Learn How to Make Wildly Profitable Media Buys ($197 value for FREE but only while they last)
Exclusive Bonus:  Dream Car Contest
(Don't Miss This!)

Insider Secrets to Profitable Media Buying ($197 value for FREE but only while they last)
Exclusive Bonus:  Dream Car Contest
(Don't Miss This!)

Want to be the Next MicroCap Millionaire?
(Don't Miss This!)